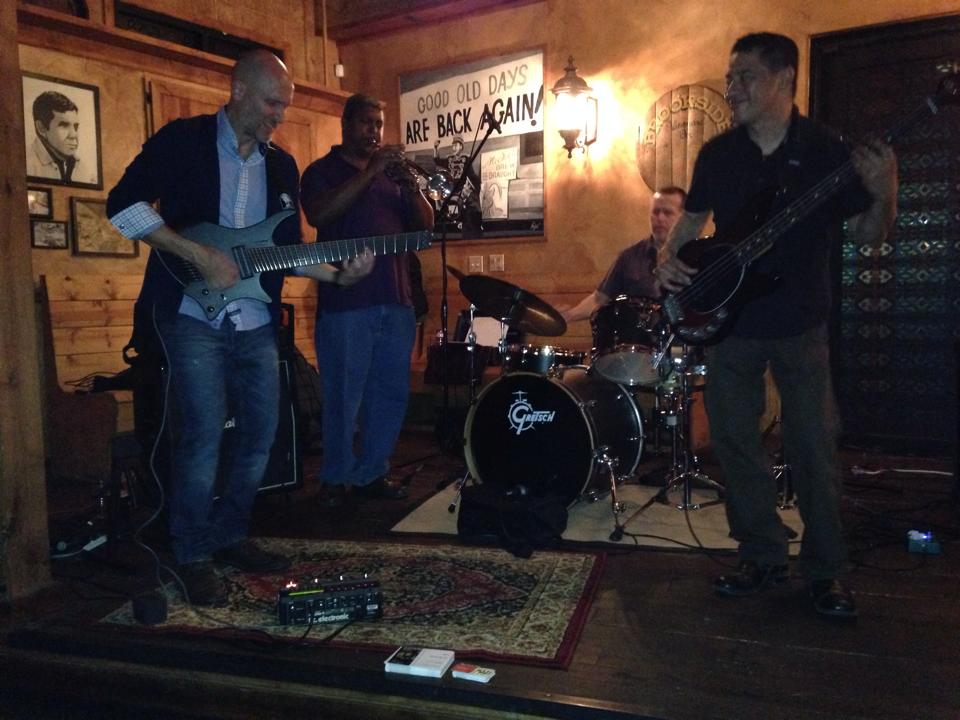 Matt Vandal
Matt Vandal is a remarkable guitarist. His solo fingerstyle sound will remind you of Leo Kottke and Chet Atkins, both of whom are clear influences on his style. Then his fusion trio will ignite your ears with his enthralling and melodious guitar solos. You will hear his many influences in his playing. Including Eric Johnson, Steve Morse, Pat Matheny, and Bireli Lagrene; among many others.

Matt was born in Minnesota, lived in Wisconsin, Florida, Alabama, and Georgia before moving to Arizona 7 years ago. After completing his bachelor’s degree in psychology, he decided to “put it to good use and play music full time”.
Matt has been playing guitar since the age of seven. “I grew up in a VERY musical home. My Dad played in bands while attending college and my Mom is a classically trained pianist. Two of my brothers are guitar players and another brother played bass. My family has always been connected in one way or another to that beautiful sonic universe that is music.” states Matt.

He has played as many styles of music as he can get his hands on. He was a member of the Pensacola Guitar Ensemble (a classical guitar quartet) is currently teaching guitar, and plays out with the Vandal Hancock Duo and Matt Vandal Group with is a fusion quartet.
​
His versatility can be heard when he plays whatever style he chooses at any given time. He is a dynamic performer of a rich and diverse musical legacy.
Matt's live repertoire contains original music as well as classical pieces, jazz, fusion, blues, and more.
While you will find his techniques impressive, you will find his sound to be remarkably vibrant and harmonious.

Jeff Curnutt
​Jeff Curnutt has studied drums and percussion since the age of 11. Starting out with local instructors in his hometown of San Antonio through several world music teachers at the University of North Texas (such as Ghana's master drummer Gideon Alorwoyie), Jeff has maintained a passion for learning and continues to seek ways to improve his craft.

While Jeff appreciates many different musical styles and drummers, he cites Bill Bruford, Gavin Harrison, Tony Williams, and Elvin Jones as some of his favorites.
Mario Zelaya
Mario Zelaya is a professional bass player, composer and producer in different styles of music including Brazilian, Latin, World Music and Radio commercials for local Spanish speaking radio stations.

His Bass playing is influenced and inspired by Jaco Pastorius, Richard Bona, and Marcus Miller.

Mario has been playing Bass since the age of eleven.  Since then, Mario has performed with
many different bands in Europe (Sweden), Latin America, and the United
States.
James Russell
James Russell, (Russell), began playing trumpet in Wilmington, Delaware at the age of 9. Playing in school bands and choirs, he also sang, played Trombone, Baritone, French Horn, and Tuba. Wilmington is the home of legendary jazz trumpeter Clifford Brown. As a young student, Russell was exposed to Clifford’s teacher, Boise Lowery. Russell’s dedication and love of music found him playing professionally at the age of 13. Performing regularly thru his teen years with a variety of East Coast funk and dance bands.

Russell toured Europe with the American Youth Studio Band, before embarking on a college career. He first recorded with AYSB in Switzerland.
While in college, Russell joined a “free jazz” band, and began working with various acoustic jazz bands in the area. Among others he performed with future jazz luminaries Geri Allen, and Dale Fielder, as well as well as jamming with Charles Earland, and Tommy Turrentine. Russell left college early to tour with “oldies” band DC Fitzgerald.
​
Russell later moved to New York, worked a day job, and did studio work. Recorded with Artie Simmons and the Jazz Samaritans, while working in the touring band for Calypso great The Mighty Sparrow. Sparrow’s band allowed Russell an opportunity to expand percussion and vocal skills while continuing his primary instrument, Trumpet.
​
Russell got to Arizona in 2001, performing regularly again at the encouragement of Dale Fielder, and a couple of successful local gigs. Met fellow band member Mario Zelaya in AZ while performing with the local band Cannibal Kitchen. Russell gives trumpet lessons, loves Funk, Jazz, Latin Jazz, Guitars, Reggae, Fats Navarro, George Clinton, Big and Rich, and a generally eclectic brew of fiery musicianship.
​
Sound cloud